Net income and adjusted income for the quarter reflect of income from our previously announced transactions to form and capitalize (NYSE:SAFE) and the successful outcome of the Bevard litigation with , net of costs.

Adjusted income represents net income computed in accordance with GAAP, prior to the effects of certain non-cash items. The calculation of adjusted income and reconciliation to GAAP net income is presented in the financial tables that follow the text of this press release.

The Company has published a supplemental to this earnings release which is available at www.istar.com in the "Investors" section.

iStar formed SAFE to expand and efficiently capitalize iStar's ground lease business.  iStar contributed to SAFE an initial portfolio of 12 assets, many of which iStar had owned for more than a decade, which had a gross book value of and a net book value of , net of of depreciation, on .

In March, SAFE completed a secured debt financing on the initial portfolio and distributed all of the proceeds of the financing to iStar.  In April, through a merger and other transactions, two institutional investors acquired a 51% ownership interest in SAFE for ,  representing per share, based on a total enterprise value of SAFE of , including the of in-place secured debt.  iStar received the of cash proceeds from the acquisition transaction and retained a 49% interest in SAFE.

As a result of the SAFE transactions, iStar:

"We believe ground leases represent one of the most compelling investment opportunities in the real estate market. There are very few hard assets that offer safety in uncertain times, growing income in an environment in which rates remain at historically low levels, along with an opportunity for significant capital appreciation," said , chairman and chief executive officer. "We have created SAFE to allow iStar shareholders to benefit from what we believe is a large and attractive market opportunity."

iStar will manage SAFE pursuant to a management agreement. After the first anniversary of SAFE's IPO, iStar will receive an annual management fee equal to 1% of SAFE's equity which will be paid in shares of SAFE stock.

Following SAFE's IPO, iStar, along with two senior executives, have entered into a 10b5-1 stock purchase plan to purchase in the open market up to of additional SAFE common stock at prices below per share.

At June 30, 2017, the Company's portfolio totaled , which is gross of of accumulated depreciation and of general loan loss reserves and includes market value of SAFE shares as of .

iStar's strategy is to focus on finding investment opportunities within its real estate finance, net lease and ground leases businesses. In addition, the Company continues to make significant progress in developing and monetizing its operating properties and land & development assets. 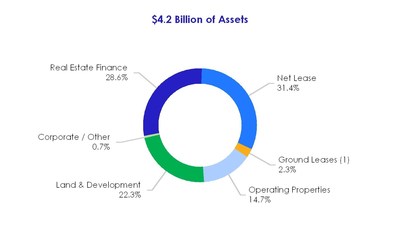 During the second quarter of 2017, the Company invested a total of associated with new investments (including SAFE), prior financing commitments and ongoing development across its four segments, and generated of proceeds from repayments and sales.

At June 30, 2017, the Company's real estate finance portfolio totaled . The portfolio is categorized into iStar 3.0 loans, made post , and legacy loans, which were all made prior to .

At the end of the quarter, iStar's net lease portfolio totaled , gross of of accumulated depreciation. The portfolio was comprised of of wholly-owned assets, a equity investment in its net lease joint venture and the market value in shares of SAFE.

Since 2014, the Company has invested in new net lease investments primarily through its net lease joint venture with a sovereign wealth fund, in which it holds a 52% interest. At the end of the quarter, the venture's balance sheet, gross of of accumulated depreciation, included of assets, of liabilities and of equity (net of a non-controlling interest).

At the end of the quarter, iStar's operating property portfolio totaled , gross of of accumulated depreciation, and was comprised of of commercial and of residential real estate properties.

The Company's commercial operating properties represent a diverse pool of assets across a broad range of geographies and collateral types including office, retail and hotel properties. These properties generated of revenue offset by of operating expenses during the quarter. At the end of the second quarter, the Company had of stabilized assets and of transitional assets. iStar generally seeks to reposition transitional assets with the objective of maximizing their values through the infusion of capital and intensive asset management efforts.

At the end of the quarter, the residential operating portfolio was comprised of 36 units generally located within luxury projects in major U.S. cities. The Company sold 5 units during the quarter, generating of proceeds and a gain.

At the end of the quarter, the Company's land & development portfolio totaled , including 8 master planned communities, 6 waterfront projects and 15 urban/infill developments. These projects are collectively entitled for approximately 13,000 lots and units.

Sales in the quarter included the conveyance of Bevard, a master planned community in , to following a judgment in the Company's favor in a long-standing legal dispute. The Company received a total of of net proceeds during the quarter which resulted in of other income and an income from the land sale.  The Company had previously announced that had filed a petition with the Court of Appeals with respect to approximately of post-judgment interest, however that motion was denied. iStar is also entitled to recover attorneys' fees and costs which the Company is pursuing. A third party holds a 4.3% participation interest in all proceeds from the judgment.

The Company is capitalized with unsecured and secured debt, preferred equity and common equity. The chart below shows the capital structure of the Company at quarter end.

At the end of the quarter, iStar had unrestricted cash and capacity on its revolving credit facility of , which will be available for investment activity, repayment of debt and working capital.

This guidance assumes, among other things, the closing of certain land & development and operating properties that the Company is marketing for sale and that general macro economic conditions continue to remain favorable. Please see the financial tables that follow the text of this press release for a reconciliation from GAAP net income guidance to adjusted income guidance.

(NYSE: STAR) finances, invests in and develops real estate and real estate related projects as part of its fully-integrated investment platform. Building on over two decades of experience and more than of transactions, iStar brings uncommon capabilities and new ways of thinking to commercial real estate and adapts its investment strategy to changing market conditions. The Company is structured as a real estate investment trust ("REIT"), with a diversified portfolio focused on larger assets located in major metropolitan markets.

iStar will hold a quarterly earnings conference call at today, August 3, 2017. This conference call will be broadcast live over the internet and can be accessed by all interested parties through iStar's website, www.istar.com. To listen to the live call, please go to the website's "Investors" section at least 15 minutes prior to the start of the call to register, download and install any necessary audio software. For those who are not available to listen to the live broadcast, a replay will be available shortly after the call on iStar's website.

Note: Statements in this press release which are not historical fact may be deemed forward-looking statements within the meaning of Section 27A of the Securities Act of 1933 and Section 21E of the Securities Exchange Act of 1934. Although iStar believes the expectations reflected in any forward-looking statements are based on reasonable assumptions, the Company can give no assurance that its expectations will be attained. The Company undertakes no obligation to update or revise publicly any forward look statements, whether as a result of new information, future events or otherwise. Factors that could cause actual results to differ materially from iStar's expectations include general economic conditions and conditions in the commercial real estate and credit markets, the Company's ability to generate liquidity and to repay indebtedness as it comes due, additional loan loss provisions, the amount and timing of asset sales, changes in NPLs, repayment levels, the Company's ability to make new investments, the Company's ability to maintain compliance with its debt covenants, the Company's ability to generate income and gains from operating properties and land and other risks detailed from time to time in iStar reports.